Walter was recently chosen to coordinate the bid of Switzerland on behalf of Crans-Montana (with the city of Sion) for the UEFA Women’s Euro 2025.

Organisation of International Footballtraining camps, and Football Tournaments, in Switzerland, from 2010 to today (www.cransmontanafootallcamps.com) 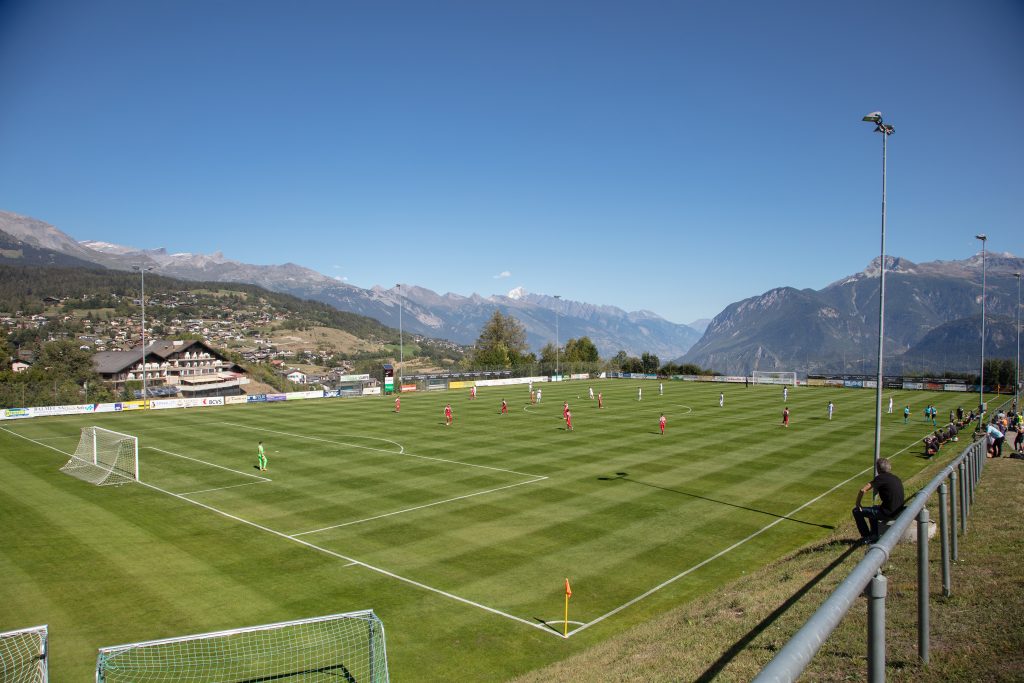 Walter and his team of « Crans Montana Football Camps Association » have again experienced a great season of footbal camps in 2022 in Crans-Montana.

11 camps were organized in 2022. Professional, amateur and junior teams took advantage of the fresh air of Crans-Montana to organize their camp with a rich program of activities. Five friendly games were also organized on the pitches of Crans-Montana.

Walter and his team of  “Crans Montana Football Camps Association” presented this year an absolute record since its founding in 2010 !

15 camps were organized in 2021, including those of 2 national teams (US National Soccer team and U21 of the Swiss team), those of 3 Super League teams (FC Basel, Servette FC and FC Sion) and those of 3 women’s teams (the European champions of Olympique Lyonnais, the Swiss champions of Servette FC qualified for the Champions League and GC Féminin). Five matches and a football tournament were also organized on the pitches of Crans-Montana.

Here is the full list of teams and matches that took place in Crans-Montana / Switzerland in 2021:

The 2021 season was a record year for Crans-Montana Football Camps Association! The turnover was doubled compared to the previous year with an economic contribution of CHF 1.5 million Swiss francs for the region of Crans-Montana, whose reputation for football camps is confirmed even more!

Walter and his team of “Crans-Montana Footballcamps Association” managed to bring the following Professional and Amateur-teams to Crans-Montana/Switzerland:
The 2020 season was very special as of Covid-19, as no foreign team was able to come for training.
However, we also organised 3 friendly matches Servette FC vs. Evian (France), Servette FC vs. Neuchâtel Xamax, and FC Sion vs. Lausanne-Sports.
For more information : www.cransmontanafootballcamps.com

Walter Loser and his team managed to bring the following International and National Top Footballteams for the summer season 2018 to Crans-Montana/Switzerland:
As chief of Press of the “Festival des Alpes 2019”, Walter organised a top friendly game in Lens/Crans-Montana: Valencia C.F. vs. AS Monaco (televised).
He also cooperated to the following top matches, FC Sion vs. Olympique Lyonnais, PSV Eindhoven vs. Neuchâtel Xamax, Galatasaray SK vs. PSV Eindhoven, Valencia C.F. vs. Galatasaray.

Walter Loser and his team managed to bring the following International and National Top Footballteams for the summer season 2018 to Crans-Montana/Switzerland:
As chief of Press of the “Festival des Alpes 2018”, Walter organised 2 top friendly games in Lens/Crans-Montana: Valencia C.F. vs. Lausanne-Sports (televised), and FC Sion vs. FC Chiasso.
He also cooperated to the following top matches, FC Sion vs. PSV Eindhoven, FC Lausanne Sport vs. Servette FC , PSV Eindhoven vs. OGC Nice, FC Sion vs. Grenoble Foot, FC Lausanne Sport vs. AS Monaco, FC Sion vs. Everton FC, Everton FC vs. AS Monaco, FC Sion vs. Valencia CF.
For more information, please check the website of the Crans-Montana Footballcamps Association, which is the company of Walter Loser:
www.cransmontanafootballcamps.com

Walter Loser and his team  managed to bring the following International Top-Teams for the summer season 2017 to Crans-Montana/Switzerland:

For more information please check our new website of the

During the summer-season 2016, we managed with our company “CMFC” (www.cransmontanafootballcamps.com) to bring more teams to Crans-Montana/Switzerland for their International Training-camps, and most all teams participated also at friendly games.
The following teams came to our top organised training-camps:
Here-after you see pics of these teams at their training-camps in Crans-Montana, in a great environment in the Swiss Alps, as well also at their friendly games on our FIFA-Norm piches in this great mountain-resort.
I am already preparing the new summer-season 2017, and if any Clubs are interested for a camp, match etc., please contact me on my contact numbers/mails on this website.

During the summer-season 2015, we organised again with our company”CMFC” (www.cransmontanafootballcamps.com), together with our Partner-agency “Matchworld” International Football-training-camps with important teams, as well as the 3rd Edition of the Valais Summer Cups (www.valaiscups.com), in Switzerland.
In summer 2015, the following men’s-teams participated at our training-camps/ and at the tournaments:
The Valais Women’s Cup took also again place in summer 2015 with the following women’s teams: Olympique Lyonnais (France) Paris-Saint Germain (France), FC Bayern Munich (Germany), and FC Zurich (Switzerland).
At the VS Youth Cup participated the stars of tomorrow (men’s teams Under 19 years old), the following teams: AS Monaco (France), Athletico Madrid (Spain), FC Porto (Portugal), FC Sion (Switzerland).

Again in 2014, I organised with our new structure “CMFC” (www.cransmontanafootballcamps.com) International Football Camps with important teams, and we participated again at the 2nd edition of the ValaisCup (www.valaiscup.com).

This summer we got the teams of SL Benfica (Portugal), Shakhtar Donetsk (Ukraine), as well as FC Sion (Switzerland) for training to CransMontana, and to participate at the 2nd ValaisCup. We organized also the 2nd edition of the Valais Women’s Cup, with the best europeanteams of Olympique Lyonnais, Paris Saint Germain, FC Barcelone, and RSC Anderlecht. All our events were a great succes, and we brought a great economic and Media added value to the Valais and CransMontana, and positioned Switzerland again as a footballdestination in the summer. For more information: MSM Football (

International teams, like Porto (Portugal), Wolfsburg (Germany), Olympique Marseille (France), St. Etienne (France), Sion (Switzerland), as well as the National Teams Men U21 from Brazil, Egypte, Kosovo etc. and also the Women’s national teams of Brazil, China, New Zealand and Mexico..participated at our tournaments and at the training-camps in Crans-Montana in the Swiss Alps.

Walter is also in charge of all Media-relations during these camps and tournaments, and acts as a press-officer for the International tournaments, where all games are televised in the different countries where the teams are from.

Walter Loser, who created in 2011 together with Mélanie Rey, the professonal structure ‘MSM-Football Crans-Montana’ was able to bring the following International Football teams to Crans-Montana, Switzerland for a training camp and also for matches.

International matches were organized as follows: UAE-Team vs. FC Sion, Olympique Marseille vs. FC Sion and a International Women’s tournament before the London Olympics.

Walter Loser co-operated with the organisers from France at Cristal Festival, which is the biggest festival for medias in Europe, with over 1’000 participants. The 10th edition of this festival took place from December 15th to 19th, 2010 in Crans-Montana, Switzerland.

Walter is still in permanent contact with with the team-leaders and players of the Swiss National Football team, and sees them very often during their games and training camps.

Collaboration at the Omega European Masters golf event in Crans-Montana, Switzerland during many years, and still presence every year at this prestigious golf tournament.

Walter Loser was project Manager for Lausanne Tourism. He organised  hospitality services for ‘Lausanne, the Olympic Capital and Lake Geneva Region, at the Swissôtel in Beijing for the duration of the summer games 2008.

In this hospitality in Beijing, a exposition was organised in cooperation with the Olympic Museum of Lausanne.

The brigade of the Lausanne Palace-Hotel (Switzerland) was in charged of the Swiss restaurant.

Overall, 1500 guests from all over the world were taken care of during the games.

The guests that attended this event were, during the 1st week:
the ‘Olympic Familiy’ (IOC, International Sports Federations, National Olympic Committees etc.), during the 2nd week: the representatives of tourism and during the 3rd week: Companies from China, invited by the ‘Economic-Promotion of the Canton of Vaud and Geneva.

Walter Loser was part of the bid committees of Sion-Valais, Switzerland, for the 2002 or 2006 Winter Olympic Games in Switzerland. He has very good connections with the International Olympic Commitee IOC, as their headquater is in Lausanne, Switzerland.

Walter Loser was Director of tourism of one of the biggest Winter- and Summerresorts in the world, Crans-Montana, Switzerland.

He was in charge of the Marketing the resort, as well as Communiction, events and coordination of all the infrastructure as well as coordination of all partners (Hotels, Agencies, Cable-car company, shop-owners, restaurants etc.) of this big Ski- and Golf-resort with a total capacity of approx. 40’000 guest in High-season.